Romancing the Stone (A Brief History of Tugtupite)

“For ages, the Inuit of Greenland have understood the power of tugtupite. Legend has it that lovers can cause the stone to glow fiery red just from the heat of their romance. The brilliance and vibrant colors announce the intensity of their love.” (MinerShop - 2002) 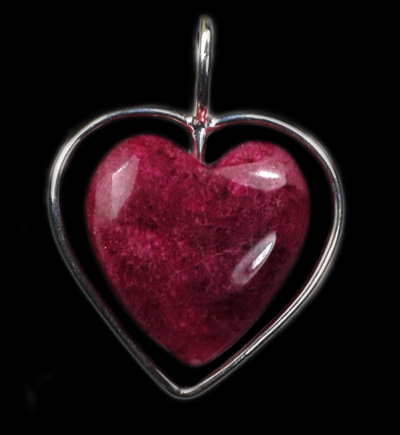 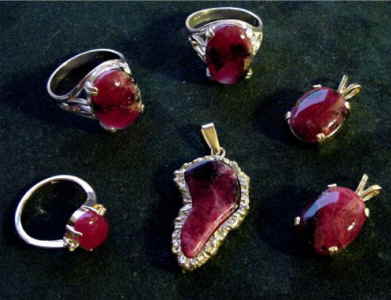 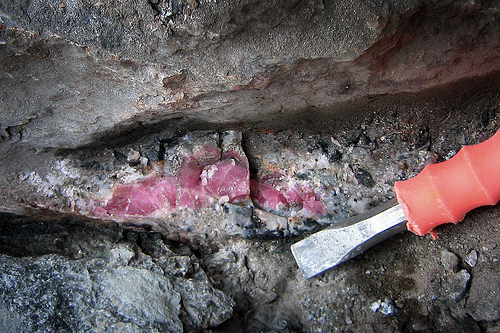 Perhaps the most famous mineral found in Greenland is tugtupite - and is certainly the main quest of those who travel to this remote area. Local villagers spend much of their free time in pursuit of this stone and many legends have risen around tugtupite. One such "legend" is the quote above which I penned in 2001 upon my return from my first trip to Greenland. I felt the "Tutu" story (below) didn't have the deserved romance. The above quote has since been copied to hundreds of metaphysical websites and in print - the power of the internet!

Tutu - Inuit legend attributes tugtupite to “Tutu” - the reindeer girl. Tutu went to the mountains to give birth to her first child and during birth the miraculous life-giving bloods seeped into the mountain stones and created tugtupite. Thus it is known for life, romance and fertility.... (The painting shown above was created by a local Greenland artist, hanging in the lobby of the Narsaq Hospital, showing Tutu in the mountains giving birth)

Today, in metaphysical & spiritual healing lore Tugtupite (also known as the reindeer stone) is marketed as an emotional stone. "It can protect one from negative energy of many kinds by wearing or carrying the stone, and is often sought for this shielding property. It is also helpful for removing energy blockages, and to clear the aura. Tugtupite is reputed to strengthen romantic relationships, and expand the love and sexual experience, and cure depressions. Physically tugtupite is used in general healing, purifying blood, to stimulate hormone production, and increase fertility. Tugtupite opens and clears the heart chakra, and will also activate and integrate all the chakras." - pretty powerful inert rock (if that's your thing)!

Tugtupite is one of the world’s few deep red gemstones, sometimes translucent, and always brightly fluorescent. Often referred to as the "king of fluorescent minerals", it is known worldwide for its beauty under ultraviolet light. When exposed to UV light (or sunlight) the color deepens to a beautiful saturated red, sometimes to an almost grape color (a tenebrescent property). This color change can last for weeks, and is easily restored simply by exposure to sunlight. Heat and moisture also accentuate the color.

Tugtupite, discovered in 1957 by Professor H. Sorensen (Denmark), was determined to be closely related to sodalite. It was originally called "beryllium sodalite". A second discovery in 1962 from the area around the Kangerdluarssuk Fjord generated more interest in the mineral. In 1963 it was recognized as a new mineral and given the name "tugtupite", derived from the locality where it was discovered - Tugtup agtakorfia (although most folks prefer the "lore" above). Gem quality tugtupite is among the rarest of gemstones, only found in remote areas of Greenland - and always in small quantities. In high demand by collectors, the finest specimens are almost always reserved for jewelry.

Tugtupite is only found in three areas in the world - Greenland, Mt St Hilaire Canada, and Kola Russia. Greenland is the only supplier of gem quality tugtupite and is the only area where sufficient quantities can be found to supply the gem market with enough material to make this a marketable gemstone. The mines are located high in the mountains surrounding the fjords in an area known as the Ilimaussaq Complex - a unique geological formation approximately 8km x 20km in area. Access to the mines is only by foot (and boat), and the rough material must be carried down the mountain by backpack. (There are no roads in Greenland, even interconnecting cities, much less to the remote mountain areas.) The difficulty in finding gem quality specimens, mining them, and then porting them out of the mountains only adds to the value of this extremely unique, rare and beautiful gem. (The USGS makes mention of tugtupite being found in streams off the mountains of Nepal but this has never been verified).

Tugtupite from Greenland is naturally colored red, crimson, white, pink, and even blue. Fluorescent colors under shortwave UV include red, white, pink, and all hues in between. Under longwave UV it is usually fluorescent a bright salmon color. It is a beryllium aluminium tectosilicate and has the chemical formula of Na4AlBeSi4O12Cl, with a hardness of 6.5 and a density of 2.35. It is found in hydrothermal veins throughout the Ilimaussaq Complex and is a "foundation" mineral for the large variety of combination fluorescent specimens from the complex. The wide variation in hues and mix of colors can result in spectacular fluorescent specimens with 5, 6, 7, or 8 colors - amazing! It is most often associated with albite, analcime, arfvedsonite, beryllite, aegirine, neptunite, and pyrochlore.

The type locality for tugtupite is Tugtup Agtakorfia, coastal cliffs on the northern shore of the Tunuliarfik Fjord (left). It was originally described (1957) as a white mineral but Sorensen described the color change to a light pink in 1960.

Fast forward to 2001 - we "rediscovered" this locality quite by accident. Howie Green, a permanent fixture on the Geo-Tours I ran until 2011, visited the cliffs on his first trip to the complex and found an interesting white rock (he didn't even have his light with him) and brought it back to his hostel. Upon examination with his light it turned out to be a wonderful, but unknown, fluorescent mineral (pic below). We returned to this spot in 2002 and collected many exquisite specimens - still unknown what they were. We didn't even realize the significance of the area we were visiting.

Upon my return to the states I had EDS testing done on the material and the results came back as a "homogenous blend of tugtupite and sodalite". It is very phosphorescent, and shows a unique response under shortwave, midwave and longwave. Some pieces were slightly tenebrescent. I nicknamed the material "Tugtulite". Only in 2004 did we finally determine that the area we had visited was Tugtup Agtakorfia and this material was from the original discovery of tugtupite. One member of our team conducted further studies (Herb Y.) and concluded that it was truly tugtupite.

Our original "rediscovery" of tugtupite from the type locality in 2001

That's me taking a break in front of the abandoned uranium mine (left), halfway to the top of Kvanefjeld. To the right is the Taseq Slope, and the mountain in the middle is Ilimaussaq - namesake for the complex (but actually not in the complex).

Tugtupite is most often found as massive deposits. Until we started exploring the complex in earnest in 2001 very few crystals have been found. In 1965 hydrothermal deposits atop Kvanefjeld were discovered that yielded the deep red material we see in gemstones today. This material is what is most commonly seen on the market, used to make beautiful cabochon jewelry by local artisans. 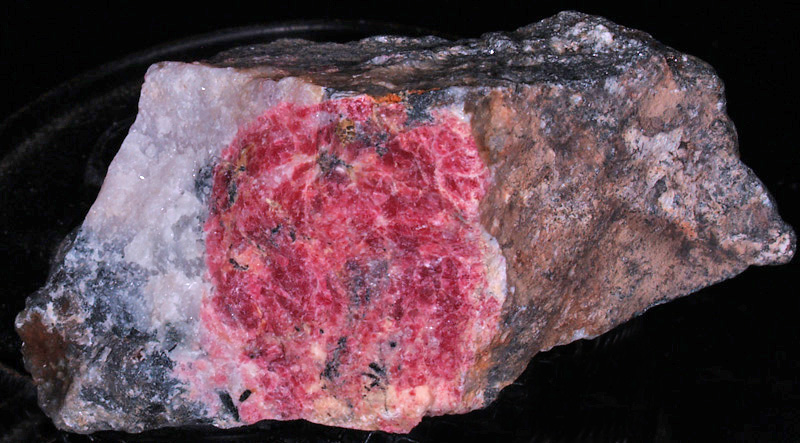 Gem tugtupite is mined mostly atop Kvanefjeld Mt. The locals have blasted the area to oblivion. Unknowingly they left wonderful fluorescent specimens for us to find while they were only focused on the deep red gem material. Much of the fluorescent material is mixed with bright green fluorescing chkalovite, grayish white fluorescing beryllite, and even sorensenite. This area became one of the most popular sites to collect for the Geo-Tour members and over the years was picked clean of most significant fluorescent specimens. 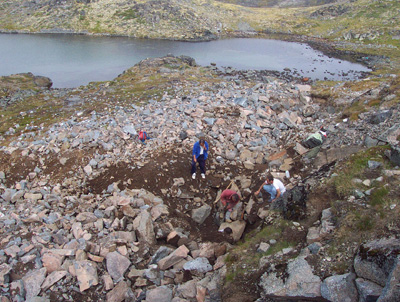 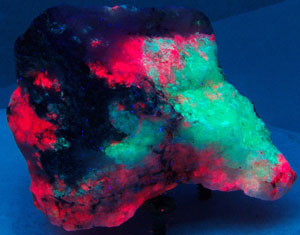 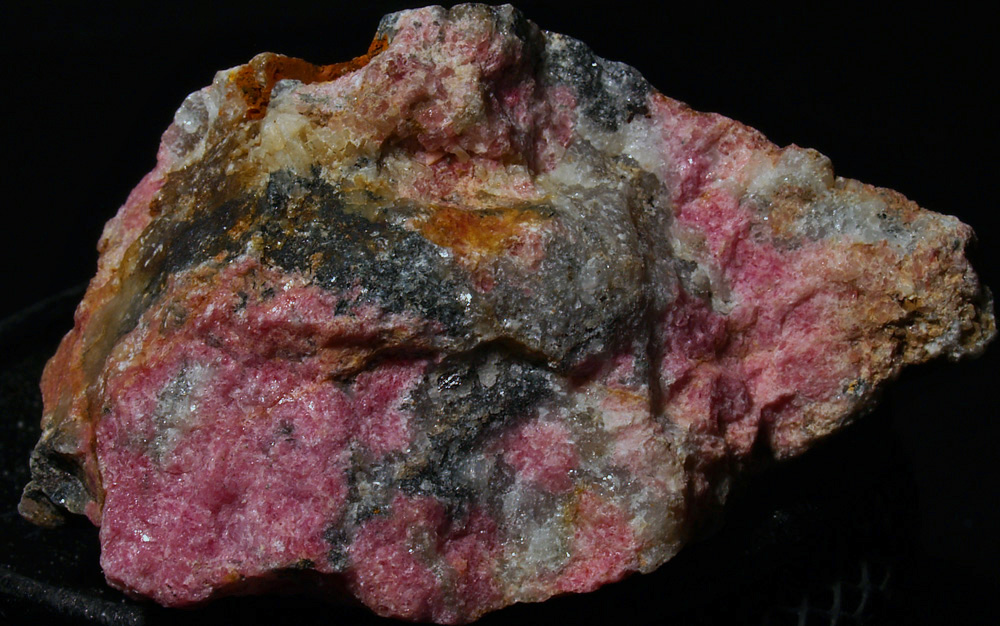 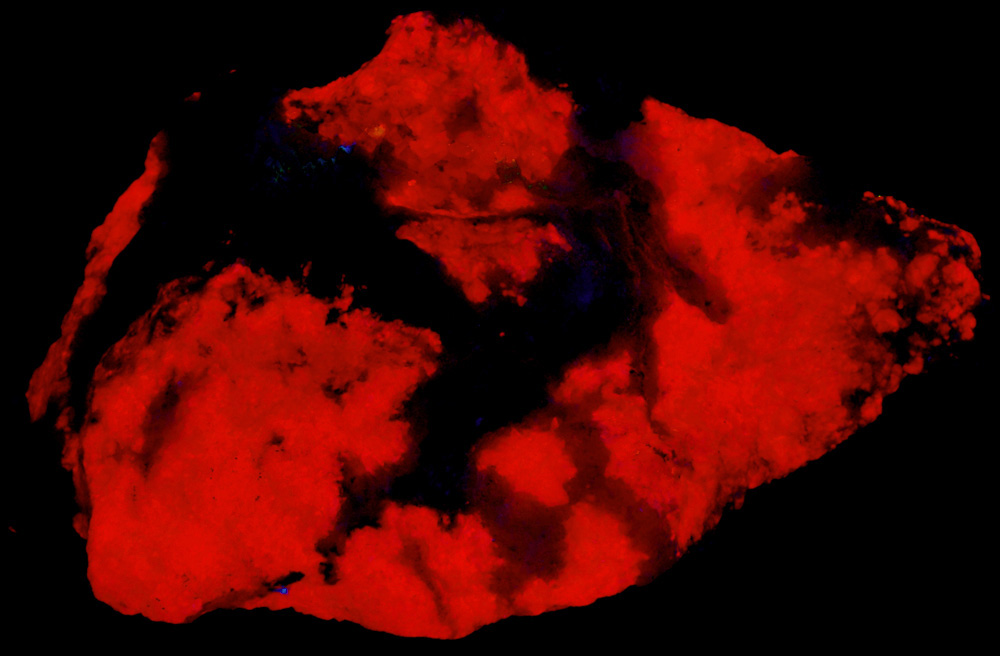 In 2002 we discovered a major deposit of tugtupite on the Taseq Slope. This material was a sugary tugtupite, slightly tenebrescent, and found as veins in an analcime matrix. It is in this material that the finest tugtupite crystals are found. The tugtupite from this area on the Taseq Slope (named Taseq Tugtupite) is nicely tenebrescent, ranging from a light pink to a deep pink. The associated analcime often glows a bright green - due perhaps to chkalovite inclusions, or uranyl activated. There have been finds of very translucent tugtupite in this area, suitable for faceting. 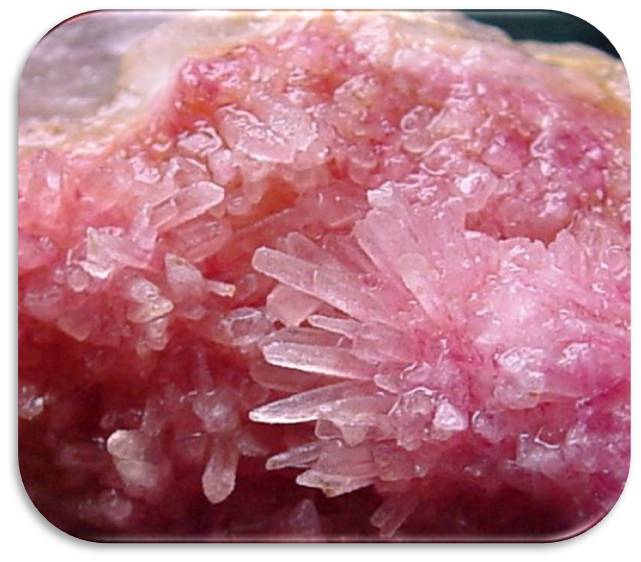 In 2004/2005 a couple more discoveries were made. One was a find of exquisite combination specimens where tugtupite was a basic constituent - Fantasy Rock and its brethren. These rocks all consist of some mix of tugtupite with numerous other rare minerals. Chkalovite, sodalite, analcime, polylithionite, natrolite, and a bunch of (as of now) unidentified minerals results in some of the most sought after specimens from the complex. One particular mix was so striking that one of the Geo-Tour members nicknamed it "Greenlandic Margarosanite" for its beauty and rarity (pic bottom right). 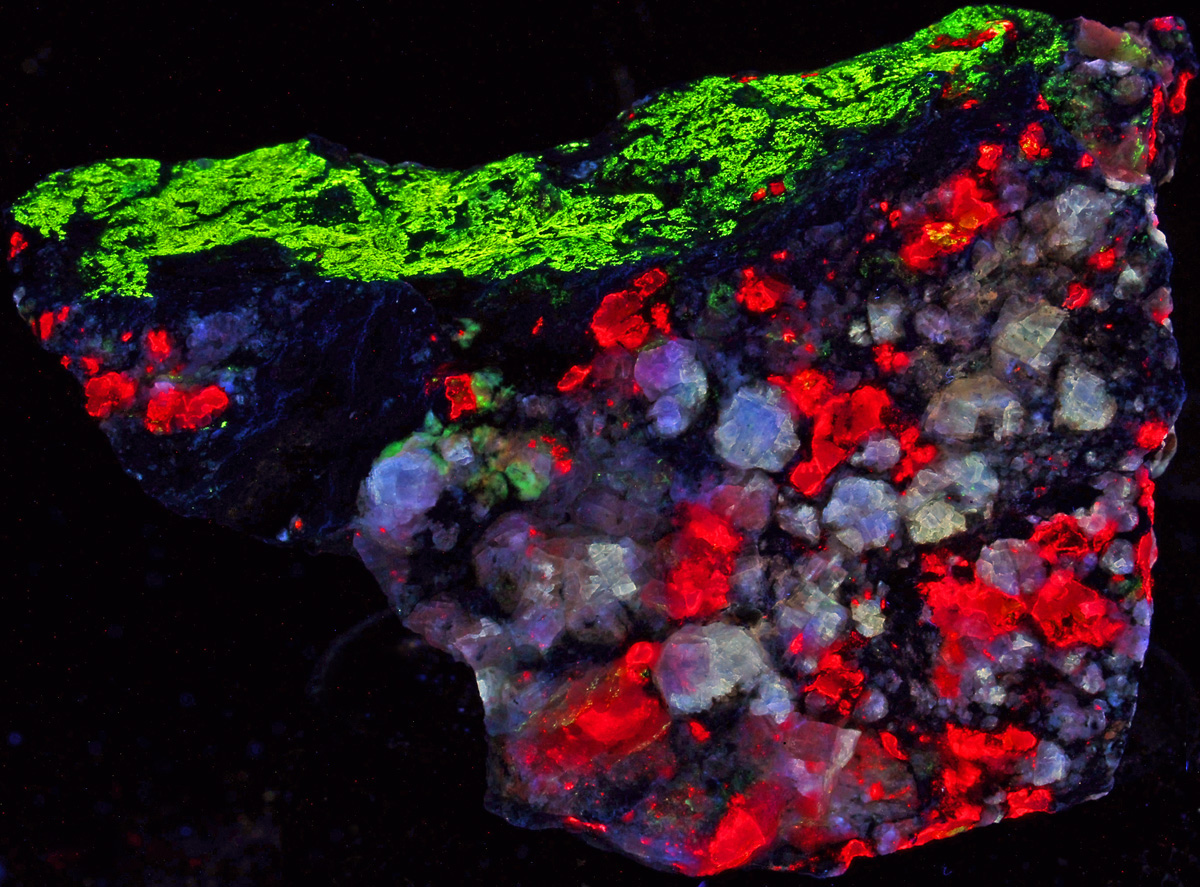 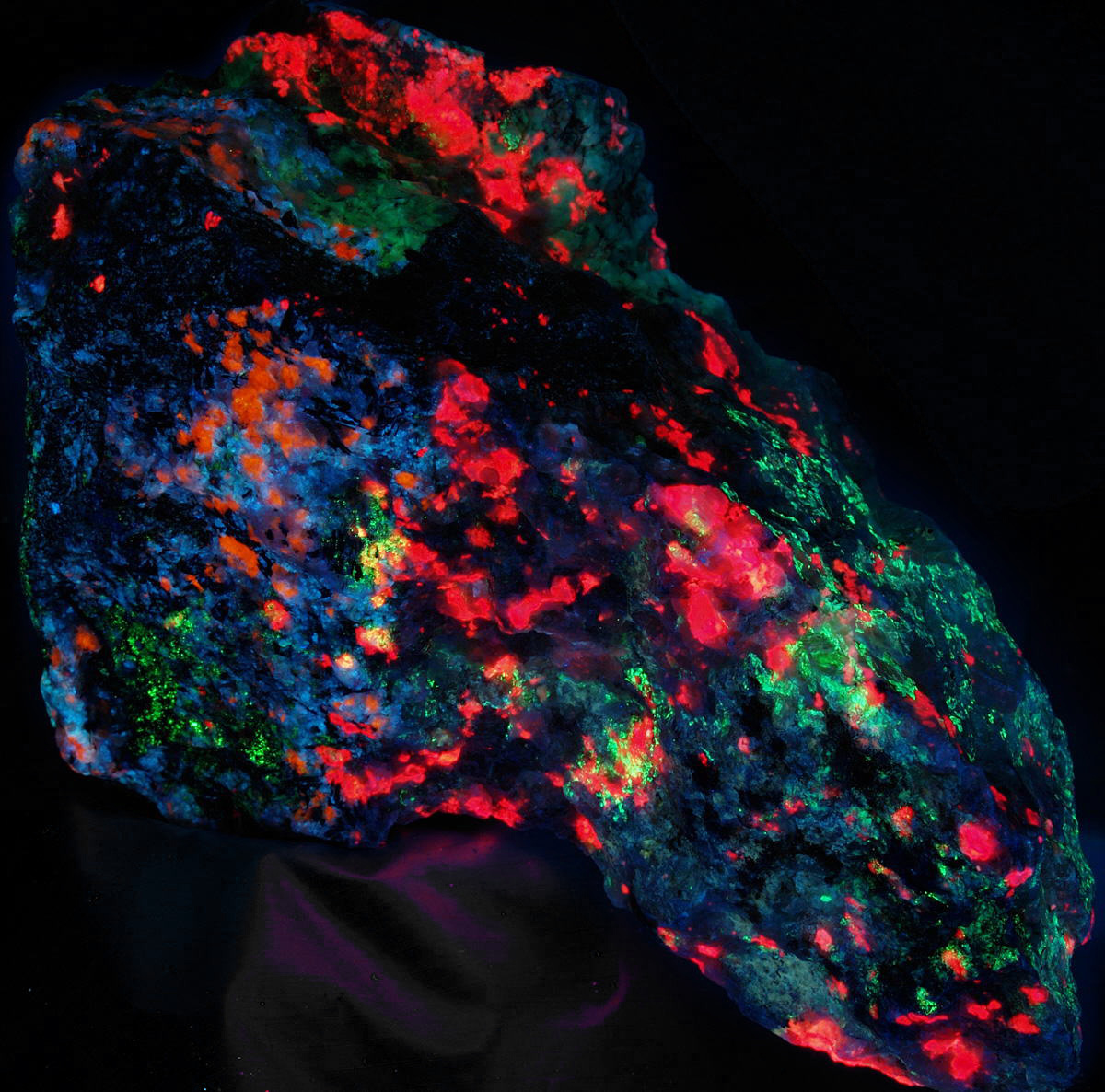 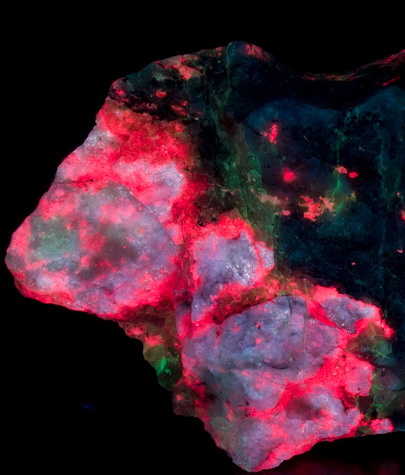 A major find were combinations of polylithionite and tugtupite - one of my favorite rocks. Kangerluassaq yielded beautiful specimens of a pink/magenta fluorescing tugtupite. A very bright tugtupite nicknamed "Sushi Tug" was found on Kvanefjeld one year - so named for its white light appearance shown below - but exceptionally bright under SW (the specimen below was huge - about 3' wide!). 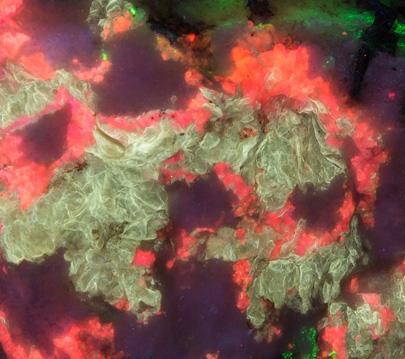 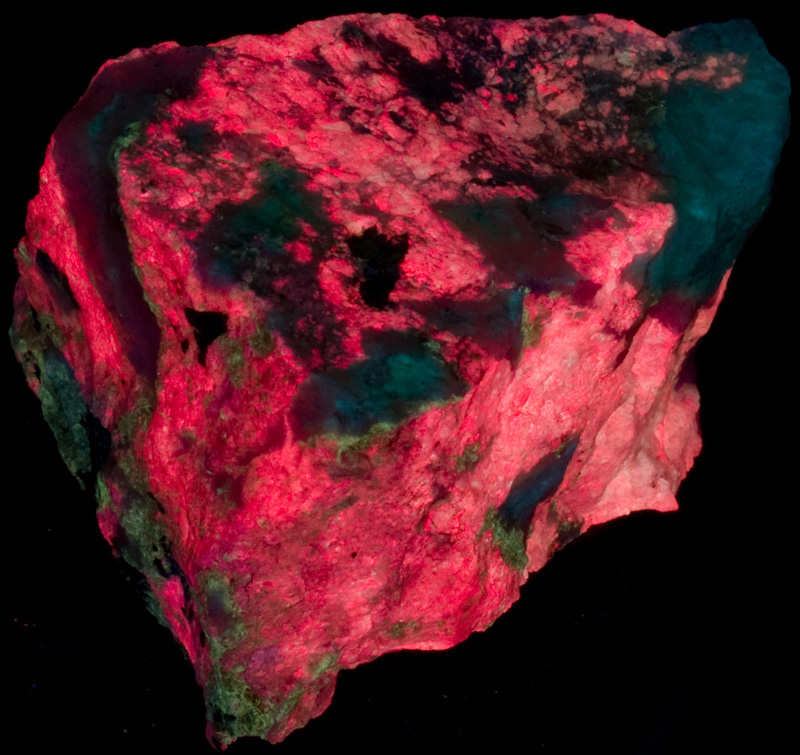 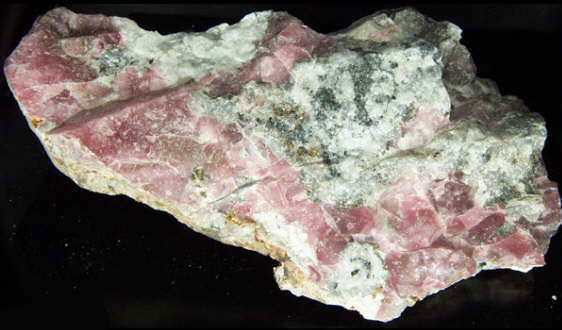 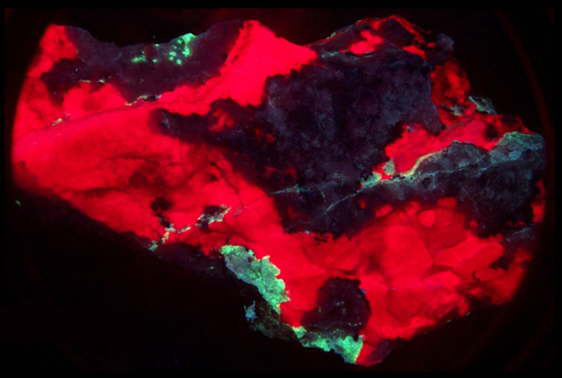 And - last but not least - is blue tugtupite, an extreme rarity. Very few pieces have ever been found but they are just as beautiful as the red tugtupites, and appear no different under UV light. But under white light they are blue. There is an unsubstantiated rumor that the blue coloring is bleached by UV - but the material is so rare I'm not willing to test it.

Blue tugtupite cabochon - on display at the Narsarsuaq museum, Greenland